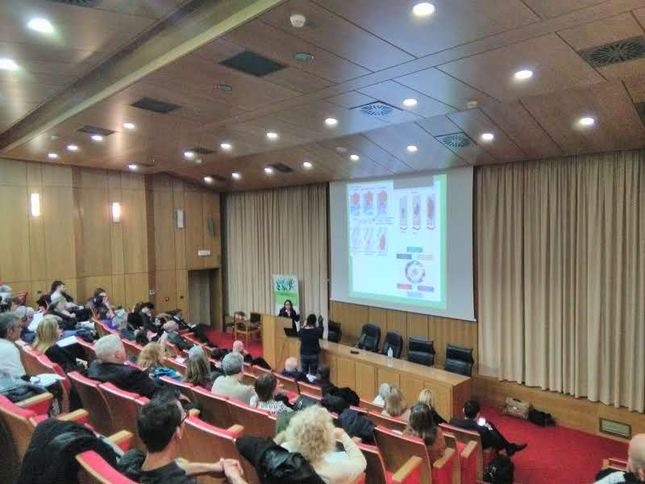 The Aristoil International Conference was hosted by the Region of Peloponnese partner and was held in National and Kapodistrian University of Athens, "Alkis Argyriadis" Amphitheatre in Athens, Greece on Monday, 27th January 2020.

The main aim of the conference was to establish international cooperation and increase visibility on an international level for the ARISTOIL cluster. In addition, the event was means of promoting olive oil, as a functional food and a Mediterranean endemic crop. Over 80 participants included national and regional public authorities, medical association representatives and olive oil key players from all countries participating in the project were there. Moreover, we were honoured with the participation of project officer, Maria Groueva from Interreg MED program and Christos Tsikmanlis, Head of the Greek FLC Unit, Certifying and Verifying Authority.

Event participants had the opportunity to learn about current developments in the research field of health benefits associated with olive oil rich in polyphenols. The project Interreg MED ARISTOIL and the future of the project was presented by Dr. Nikos Krimnianiotis, ARISTOIL Coordinator. Assoc. Prof. Prokopios Magiatis, Dept. of Pharmacy, National and Kapodistrian University of Athens presented a talk on olive oil polyphenols and the EU health claim. Prof. Magda Tsolaki from Aristotle University of Thessaloniki presented results from her study on the effect of early harvest Chalkidiki EVOO with high oleocanthal content in Mild Cognitive Impairment. Prof. Amal Kaddoumi from Harrison School of Pharmacy, Auburn University, USA presented findings from a clinical study on preserving memory and fight Alzheimer’s disease. Prof. Khalid El-Sayed from University of Louisiana, Monroe, USA presented a study on the effects of EVOO for treating cancer. Asst. Prof. Andrea Paola Rojas Gil from University of Peloponnese talked about the effect of nutritional intervention with High-Oleocanthal and Oleacein olive oil in patients with chronic lymphocytic leukemia and Monoclonal Gammopathy of Undetermined Significance (MGUS). Dr. Eleni Melliou from the Dept. of Pharmacy, National and Kapodistrian University of Athens talked about ways in which we choose the best olive oil for our health. The conference closed with questions from the audience and discussion.

The conference was followed by the final Steering Committee meeting, which was hosted by EGTC Efxini Poli, project coordinator and was held in Philippos Hotel, Athens in the afternoon of Monday, 27th January. An overview of achievements and project deliverables was discussed, as well as the continuation of the project through the Aristoil cluster. A working dinner at the end of the day provided ground for further discussions on achievements and project closure.