A SUCCESSFUL NATIONAL CONFERENCE AT THE OLD PARLIAMENT BUILDING OF ATHENS 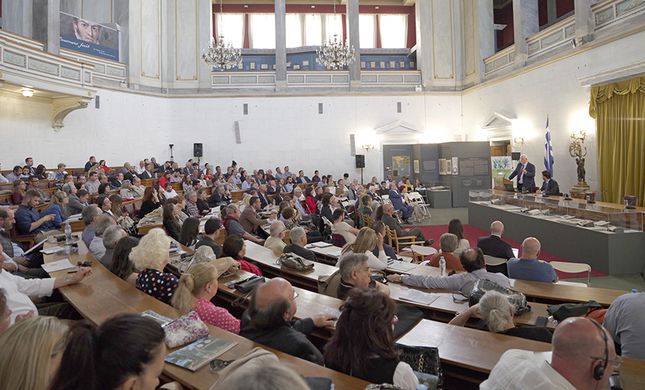 As part of developing the strategic framework for the empowerment of the Mediterranean olive oil sector, aiming at the establishment of a sustainable MED Olive Oil Cluster, EGTC Efxini Poli organised a National Conference, which took place on May 12th, in the Old Parliament building in Athens, Greece.

The national conference in Athens was an opportunity for the public, project beneficiaries and stakeholders involved in the production and research of health claim olive oil, to come together and learn about the results of the project, the Aristoil cluster and the current developments in health-claim olive oil research.

Current research findings concerning the role and mechanisms for olive oil polyphenol preventive or suspensive action on neurodegenerative diseases, such as Alzaheimer’s disease and multiple sclerosis, as well as malignancies, such as breast cancer and leukaemia, using in-vitro and in-vivo studies. Especially, eleocanthal was mentioned by several researchers as a particularly promising constituent of olive oil.

The conference was followed by a parallel celebrative award ceremony, which was organised by the non-profit organisation, World Olive Oil Centre for Health for producers who had produced high quality EVOO, according to the criteria of polyphenol content and organoleptic properties. Olive oil producers from Croatia, Italy, Spain and Greece proudly received their awards and had an opportunity to meet to researchers carrying out work on the health benefits of olive-oil polyphenols in human diet.